Hi , In my opinion not a good idea, In winds over 20 ks my traveller is right out to the side when beating, and that's where it should be for
max speed and minimum weather helm. get a good ball bearing traveller and play it when beating, its your throttle.
Regards SULA.
Top

Mmmmm, we're totally confused about our traveler plans. Not least because I've never sailed a boat that had one, so I really can't tell good ideas from bad.

You sometimes see travelers recessed into the deck or seats so the track is less obtrusive. Many beefy 'hi beam' tracks (like the one you have?) could easily span the Ballad cockpit unsupported.

Is yours the original Fico roller car kit, with turning blocks & cams added on? If so, Rig Rite has Fico parts you could use to convert back to pin stop. They are very dear.

We are unsure whether to go with set-and-forget (how many cruisers actively play the traveler, esp. when the tiller pilot is steering?) or a more complicated setup with 3:1 purchase and possibly windward sheeting for those times we do wish to actively sail to conditions. I suspect our natural inclination will be to reef sails, undersheet the main slightly, and have a nap.

BTW, we've just pulled our trav & replaced the leaky, rotting piece of wood that formerly covered the engine controls with a piece of 3/4" phenolic slab, glassed in place. It will further be supported by stainless or Alu angle tying it to the benches. Not sure what traveler we will end up with, but when we do get one, it, isn't ever going to fall off!
Top

Bob McGovern wrote:Is yours the original Fico roller car kit, with turning blocks & cams added on? If so, Rig Rite has Fico parts you could use to convert back to pin stop. They are very dear.

Bob, it's an IYE system (UK) and I believe it's original.


sula wrote:In winds over 20 ks my traveller is right out to the side when beating,

Would that be the windward or leeward side? ... not kidding, I'm not that knowledgeable a sailor!

I need to reclaim the sitting space where the track runs over the top of the seat. I use seat cushions with backs in that spot and the bottoms are getting chewed to pieces by the offending track.
Just looking for an acceptable solution ...
Peter http://www.mostlyaboutboats.ca
==================
Victoria, BC, Canada
Albin Ballad Restoration Photo Album
Top

No expert, either, but I think the idea is: car to windward in light air, to open the leech and add draft. Centered in moderate. Drop car to leeward in strong wind to blade out the sail and control leech flutter. In gusty conditions, center car and play it down to depower, rather than releasing the sheet. On a beam reach lowering the car acts like a vang, adding power by reducing twist.

Shortening the track would save your chairs but not free the deck entirely. Still has some use as a traveler tho shorter. Lowering it is okay but mount needs to be strong -- c. 400 kg. On our smaller boat we thought about a traveler but just put a U bolt on the cockpit sole and it has been fine.

Edit: Took some measurements today, & it looks like (allowing for end stops & car length) you'd have about 20" of total car movement from seat to seat, = five degrees sheeting angle either side of the centerline. That's better than nothing and would give you some additional twist control from close hauled to a close reach, say 60 degrees true wind angle. Any lower than that, you'd need to rely entirely on the vang to keep your leech tight. Which isn't the end of the world. Vang and topping lift can substitute for many of the functions of a traveler, tho with less convenience to the helmsperson.

The one function that's hard to replace is the ability to change sheeting angle & depower the mainsail in gusts w/out allowing the boom to rise -- which actually deepens draft in the bottom third of the sail, exactly when you least want more draft. If you ease the mainsheet to de-power in puffs, you'll see the first six inches or so of line you let out, the boom does not go out; it goes up. Only after the fabric has released most of its tension does the boom shift to leeward and relieve some of the heeling force, and trim to the new (farther aft) apparent wind.

With an adjustable traveler, you can leave the mainsheet cleated off and just change the sheeting angle by lowering the car to leeward. It's a way of divorcing the "leech twist /draft control" function from the "attack angle" function. It's also much less effort and line to pull a 2:1 traveler car than even a 4:1 mainsheet because you aren't having to stretch the sail fabric every time you sheet in. Loads are 10kg instead of 20. But all that presumes you are interested in actively playing the sails ... and usually presupposes your hand on the tiller, since mainsail trim and rudder angle work together. Some days I like to do that. Other days, I'd rather set the boat up for average balance and let the tiller pilot sort it out.

If that's your inclination, the HR recessed traveler w/ pin stops should work fine. One thing to consider is it prevents you from moving the mainsheet out of companionway traffic at anchor, tho you could just clip the whole thing to the toe rail like you do when running. Then just make sure your vang is up to the increased responsibilities you are asking of it. it's going to have to supply most of the twist control & at higher sailing angles than usual.
Top

OK ... it's done, but yet to be tested while sailing. Total expenditure was for the heavy duty hinges and a pair of cheek blocks. Every thing else was in stock. If it works well I may replace the track and car with something new. I'll be interested to see if the 2-to-1 pulley setup is going to be enough in heavy weather, or if I need to move up to a 4-to-1 setup.
Now the track top sits flush with the cockpit seats, with only the car protruding.

Old 1-to-1 unit spanning bridge deck and encroaching on the Admiral's seating area.

Underneath of new bridge showing hinges used for retaining brackets.

New bridge with aft part lowered to accommodate lowered track (shortened about 150mm each side) .

Forward side of car with new rollers and pulley wheels plus eyes for attaching lines to make it a 2-to-1 pull.

View from underside showing hinges bolted through cockpit wall. (Some interior lining had to be cut out to get the washers and nuts on).

Ooh, very nicely conceived and executed, Peter. Fulfils all your design briefs, & using the seat itself for the end stop means very little effective loss of travel. *applause* Almost makes me sorry we've glassed in that slab of phenolic. 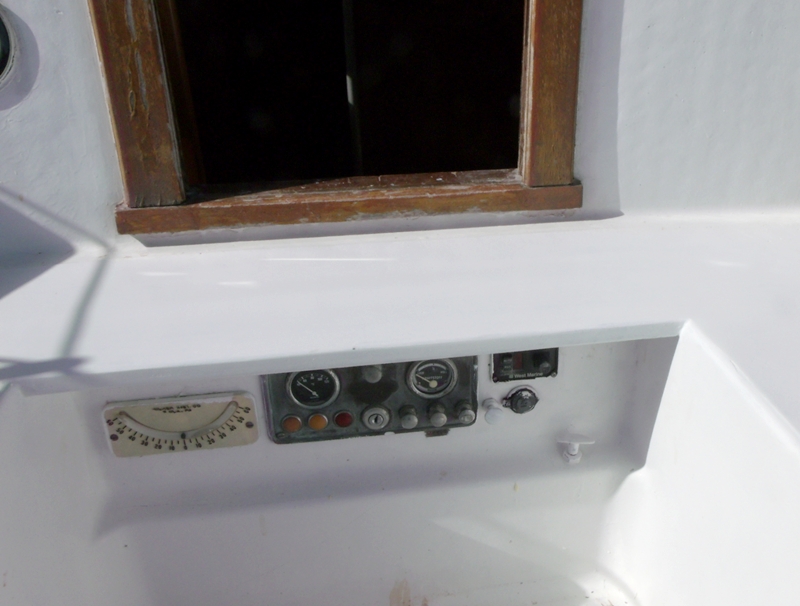 What you've got there is actually a 3:1 tackle, since both becket & fall (free end) are on the moving part. That should be plenty for this sail. We're playing with the idea of going the 'full German' on our traveler. It's a reference to German Frers & his Euro design aesthetic, where most lines are led belowdecks and only emerge at their point of use. So we might run the traveler lines thru the coamings, then back to the helm position. Tho finances may dictate use of the current traveler & upgrade later, which gives us time to rethink stupid ideas.

Nice job on your bridge deck, Bob. I like your design ideas and the way you build them.
On my traveler, I thought I had 2-to-1 as when I move the car 1 foot I get 2 feet of line back through the cleat. I hope you're correct ... 3-to-1 would be great. Must go sailing soon!
Peter http://www.mostlyaboutboats.ca
==================
Victoria, BC, Canada
Albin Ballad Restoration Photo Album
Top

Should be 3:1. What you got there is yer basic traveling gun tackle, fourth from left:

When one end of a pulley system is fixed and the other moveable, you count the total strands coming off the moveable pulley and that is your M.A.(including the fall, IF the fall comes off roughly parallel to the tackle; otherwise there is a discount on that strand). Which creates the slightly odd effect that turning a boom vang upside down, so the free end exits at the boom instead of the deck, increases your M.A.+1. Same tackle.

The force on your lovely new cheek blocks is 2x applied load; on the car, 3x. Ahh, takes me back to the days of Free Body Diagrams and Statics class.

Return to “Rig and Sails”