I got my self in a bit of a conundrum, hauled the new boat for what was hopefully just a quick yard trip to scrape and paint the bottom and have run into trouble.

I have two bulges in the hull about on either side of the boat. Look like they are right on the edges of the main bulk head.

I haven’t started pulling things apart inside yet but has anyone ever rebuilt the bulk head base or had any similar problems.... I guess first step it to get the mast de stepped and go from there?

Thanks in advance for any help or suggestions, would love to see some photos if anyone has done anything with the bulkhead. iv been feeling rather sick ever since I found them.

Hi, Is it an early model Ballad? You may have mast step issues as outlined in this post.
Peter.
Peter http://www.mostlyaboutboats.ca
==================
Victoria, BC, Canada
Albin Ballad Restoration Photo Album
Top

Hi there peter, it’s a 1978 not sure witch hull number exactly.

A failed mast step was what I originally thought but the effected areas are so far from the keel. Mid way up the waterline and on both port and starboard side of the hull.
I think it’s right in the corner of the hanging locker on one side and under the head on the other.

Mine is a 1976, hull 1085, not one with the suspect mast steps so yours probably isn't either. The only other thing I can think of is if the boat sat on it's keel (on land) for an extended period of time, and that the bulkhead-to-boat rib bolts are either loose or the holes very worn... something to check. Although on second thoughts the points of separation seem to be lower down.
It certainly is a strange one...
Peter http://www.mostlyaboutboats.ca
==================
Victoria, BC, Canada
Albin Ballad Restoration Photo Album
Top

There is a mild steel 'clavicle', or curved transverse beam, running from side to side almost the full width of the main bulkhead. The mast support truss bolts through it, and it is the thing you step over to enter the V berth. There have been reports of this beam failing at the center, again perhaps related to the mast truss web failing and the compressive force being transferred to this transverse beam. It's the rusty item in this photo: 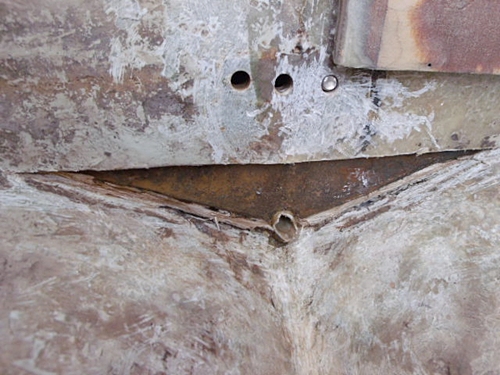 
If that beam failed and the middle pushed down, I could see rotational forces causes those bulges in the hull on both sides. Try removing the V berth floorboards and shining a flashlight toward the beam. You might see damage to the covering laminate where the truss bolts come through.
Top

Howdy friends so after a little bit of work and a lot of fiberglassing I think I have fixed.

I’m still not 100% sure I I think it was oil canning that caused the problem. I removed the “steel wing” thats bolted to the mast truss and it was 100% fine. Not a speck of rust to be seen. Seams the later model ballads used a different steel to stop the rusting issue. As I’m sure mine as been wet before as the boat wasn’t very well looked after.

Anyways back to the repairs. Firstly I cut away the bulk head tabbing that had delaminated.
mostly around the base of the bulkheads, seams this is were most of the stress is. Out of the 6 bulkheads 4 had delaminated to the point were I could remove the tabbing with a screwdriver.

I reglassed all the bulkheads back and front rather than just the one side as original. I also extended the metal wing up and got it through bolted with the bulkhead as well. I also added some angel iron in the hopes that it would add a little more surface area although I guess I hope that the steel beam should ever contact the hull anyway.

I haven’t gotten to take her for a sail yet so not sure if it’s all working but so far I tightened up the rigging a little and it’s got about 2cm less travel on the turnbuckle than before. Hopefully this means I have a much stiffer boat.

I used a multi tool for all the grinding and cutting I did on the job and although it was painfully slow for grinding it made almost no mess at all witch was important as we were sleeping on the boat at the time.

Also used 2gallons of west system epoxy and fast Harder
As well as 4 years of 1708 biaxial mat with chopped strand mat sown into it. Very thick and quite expensive but really made the job easy.

Also keeping all the epoxy in as small of a cupboard with a light in there kept it a little warm and helped with setting out the fiberglass.

I’ve been in contact with Arjuna on Facebook also but unlike his “steel wing” being ok mine was totally corroded. I was pointed towards this Problem by the rust stripes in the forward bilge.
So there was only one action I could take and that was opening up the area just under de main bulkhead in front of the maststep.
Top

After taking out all rust and pieces the area was cleaned and prepared for rebuilding with a new steel plate. Also the width of the new wing or transverse beam was extended to reach out to the first bolts on the main bulkhead in order to stiffen up this area.

The new and treated transverse beam was put back into place while closing it up with glass fibre, epoxy and lots of thickened epoxy using West 105 materials. The most difficult part for me was preparing to glass back the hatch which I took out initially and to finish off the floor properly.
This whole job can be done with simple tools but it in my case it took quite some hours work.
The good thing is that Ballad #101 is stronger as ever.

Return to “Hull and Deck”